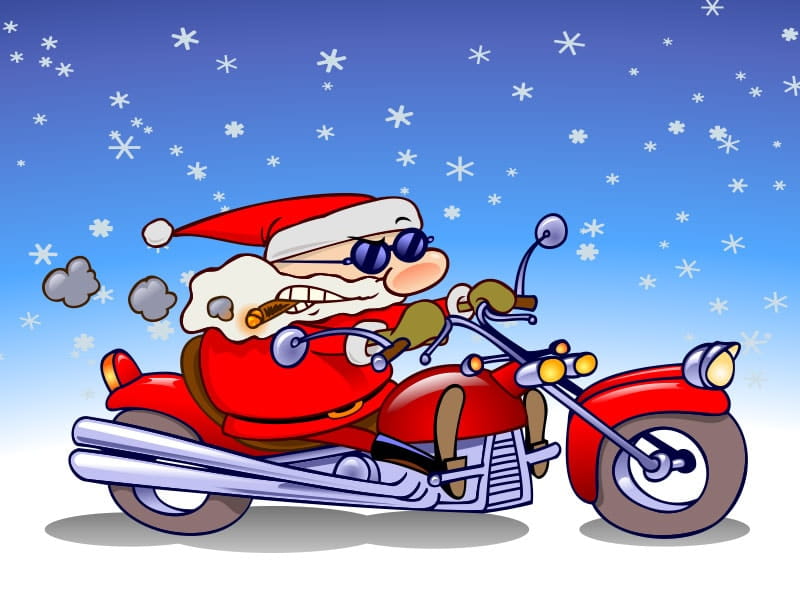 As we ride closer to the Christmas holiday, we’d like to share something a little different with you, our Dairyland® audience. Produced by our very own Bob Suehring, say hello to Biker Claus:


’Twas the night before Christmas, and all through the house,
Not a creature was stirring, not even a mouse.

The owners were all snug and warm in their beds,
With visions of this summer’s great rides running through their heads.

The cycles, too, were all tucked in for the season,
Having been winterized so thoroughly, it was beyond reason.

They’d been given fresh oil, fresh wax, and had their batteries tended,
Not a scratch, or a chip, or a ding could be found that hadn’t been mended.

Now off in the distance arose a rumble,
It made the ice crack, it made the snowmen crumble.

Yes, it was beyond belief, that jolly old elf known as Biker Claus,
Riding up on his chopper, truly a rebel without a cause.

He came bearing bright gifts of chrome and steel,
Sure to make good biker boys and girls everywhere delightfully squeal.

He deposited those gifts under the tree with care,
Being careful not to disturb the pet bunny or the hare.

Once done, he immediately headed outside to get back on his trusty steel steed,
He had many other gifts to deliver, for many had done a good deed.

A burnout he did, right there in the driveway,
Yes, that motor was runnin’, as he headed out on to the highway.

And he could be heard saying to all as he rode out of sight,
Merry Christmas to all, ride safe tonight!