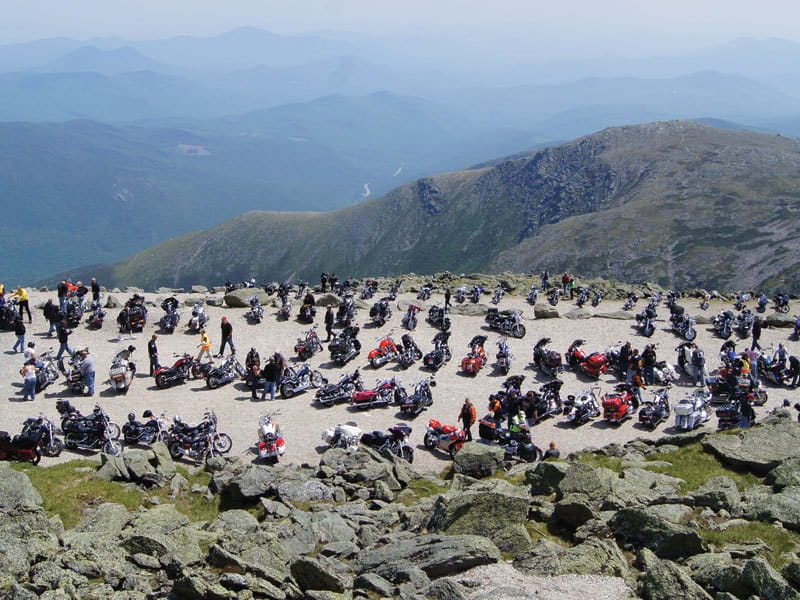 This year is the 94th edition of the annual Laconia Motorcycle Week, to be held June 10–18 in New Hampshire. A 2017 AMA Gypsy Tour Event, Laconia is celebrating its legacy as the world’s oldest motorcycle rally, and counting down to its 100th event in 2023.

The Laconia Rally got started as an unofficial gathering of about 150 riders in 1916. The following year, Laconia became the first Gypsy Tour event sanctioned by the Federation of American Motorcyclists (FAM). The FAM was the earliest predecessor of the American Motorcyclist Association (AMA).

The event was held continuously until World War II, when it went on hiatus from 1942–45. Resuming in 1946, the event continued to grow in the postwar years, with a few interruptions.

In 1964, there was no rally or races in Laconia. When it returned in 1965, the turbulent 1960s touched the rally with riots, resulting in no rally nor races again in 1966. There were no races or rally in 1975 either. The combined total of seven years without events explains why this is not the 100th running of the Laconia rally and races.

Racing—in one form or another—has always been a part of the rally. The earliest years saw endurance races, which were typically two-day races of 300–350 miles along public roads. In those most early days of motorcycling, these events helped promote motorcycles as valid transportation. They were a true test of early machines and their riders.

The hill-climb races at the Belknap Mountain Recreation Area were joined by the annual Gypsy Tour Race, which moved to Gilford, New Hampshire, in 1938. In 1965, the Bryar Motorsports Park in Loudon, New Hampshire, began hosting the motorcycle races. Today, the races are still held there at what is now known as the New Hampshire Motor Speedway (NHMS).

No trip to Laconia Motorcycle Week would be complete without a visit to Weirs Beach, where motorcycle riders have been gathering since 1916. Day or night, there’s always something happening at the Weirs. There are events and rides all week across this beautiful riding region. Here is a small sample:

There is so much fun waiting for you if take a Gypsy Tour to Laconia Motorcycle Week.

For instance, here is a fun Gypsy Tour ride to a vintage-racing event. On June 11, the ride leaves rally headquarters at 10:30 a.m. for the NHMS for USCRA Vintage Races. Plus, you can get a 50 percent discount for the day at the track.

If you enjoyed this piece on the Laconia Motorcycle Week, you might also enjoy other motorcycle events and rallies we have featured in our Events section. Check it out.