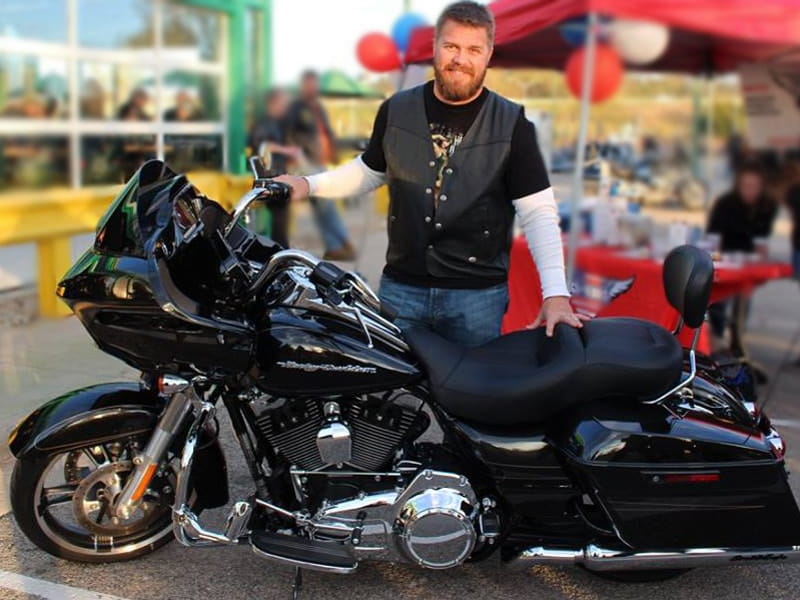 Scott was commanding a Humvee with four fellow Marines inside when an IED ripped through the vehicle, claiming the lives of all four of his Marine comrades. After being stabilized in the field, he was evacuated to Baghdad for life-saving emergency brain surgery. Scott awoke 10 days later in Maryland’s Bethesda Naval Hospital to face a multi-year recovery from a traumatic brain injury and several shattered bones.

Seven weeks earlier, Marine Lance Cpl. Scott Kruchten started a seven-month deployment with Golf Company of the 2nd Battalion 24th Marines. At 29 years old, Scott was the “new old guy” joining his brother Marines. At the time of the attack, they were actively engaged in the struggle with the insurgency out of Fallujah, in an area locally known as “the triangle of death.” While the five Marines in that Humvee were still maturing their personal relationships, they were already eternal brothers.

A love of riding

Before becoming a Marine at age 28, Scott led a successful life, owning his own home, two motorcycles, and working his dream job at Sauk Prairie (Wisconsin) Harley-Davidson (SPHD). The events of Sept. 11, 2001, spurred him to join the Marines.

During his recovery, Scott said he, “wanted to know his limit and regain active-duty status.” At this time, he also started working at SPHD again. Doctors, however, forbade him from riding a motorcycle for fear of another brain injury. Scott had to sell his motorcycles and was also unable to continue working at SPHD. Being a passionate motorcyclist, yet dedicated to making a full recovery, he put motorcycle pursuits aside while he rebuilt his life, finances, and health. The passion wasn’t lost—it was just placed on hold.

A life of service

Along with his own recovery, Scott wanted to do more. The sense of brotherhood Scott feels for all veterans is prominent in his life and has inspired him to help other veterans.

Scott was determined to “not to let this take me.” He offers a message of hope to all veterans: “Tomorrow is always a better day if you want it to be so. If you stop deciding to let all the negative things in your life have control over your attitude, you can see all the positivity around you.

Kevin Thompson, a long-time motorcycle rider with a passion for supporting veterans, has a soft spot for people like Scott. In fact, Kevin started Hogs for Heroes with veterans like Scott in mind.

Hogs for Heroes is a unique charity that seeks to help individual veterans, one hero at a time. As a grassroots Wisconsin-based nonprofit, their goal is to assist in the healing of our injured Wisconsin Veterans by returning the gift of freedom in the form of a Harley-Davidson motorcycle to a “deserving Wisconsin Veteran Hero.” Kevin, his wife Audra, along with brother Craig and his wife Michelle, serve as the founding board, dedicated to making “a large, impactful difference in a small number of lives.” They are doing so by reconnecting the therapeutic benefits of motorcycle ownership amongst our injured, mentally or physically, veteran riders—men or women who have a passion for riding and now find themselves without means or ability to do so.

The mission of this volunteer organization, which uses 100 percent of public donations toward the purchase of each motorcycle, has resonated with the community. In about a year, Hogs for Heroes raised enough money to provide the first veteran a motorcycle.

But then they were faced with a more difficult challenge—selecting a deserving recipient. Hogs for Heroes uses a set of defined criteria and a detailed application process only available on their website once funds are reached. Interested veterans may either self-nominate or be nominated during the open application period. Submitted applications are then reviewed by an advisory board to select one recipient from the deserving many. After much review and consideration, Scott Kruchten was chosen as the first recipient.

In April 2016, Scott met with Kevin and the Hogs for Heroes team. He thought it was just an interview, having no idea he had been selected to receive a motorcycle through the organization.

Once the shock passed, Scott was reconnected with his former employer, Wolf Schulenburg, owner of SPHD, and he chose his motorcycle—a 2016 FLTRXS Road Glide Special. Hogs for Heroes allows the veteran to choose the bike, up to a set financial limit, that best suits their needs and desires. The motorcycle was presented to Scott on May 4 at Quaker Steak and Lube in Middleton, Wisconsin.

For Scott this was a “dream come true to be back on a motorcycle after being free of seizures for 10 years.” He has already put 8,000 miles on his Hog and had a great summer of riding. With the freedom of riding and through the inner peace it brings, Scott said he is, “regaining something precious.

Only four months after gifting their first Harley, Hogs for Heroes was stunned to have found themselves in a position to award a second motorcycle to Wisconsin veteran hero Daniel Tinsley in September.

This ability is a direct result of a grateful and generous Wisconsin public. They are very near to their financial goal for a third bike and anticipate they will start working toward the fourth bike this winter. You can find out about Hogs for Heroes on their website. Donations can be contributed directly though the site.

We as a nation recently stopped to honor all of our veterans who have proudly served our country. We are blessed with our American freedoms, which have been provided for us by our veterans at a very high price.

As motorcycle riders, we are keenly aware of the gift of freedom and are forever thankful to our veterans. Often when we endeavor to support our veterans by caring for their needs and challenges, we focus on them as a group. It’s important to remember that service to our country today is an individual choice and carrying out active-duty service effects each veteran individually.