A motorcyclist’s guide to Kentucky's Route 11 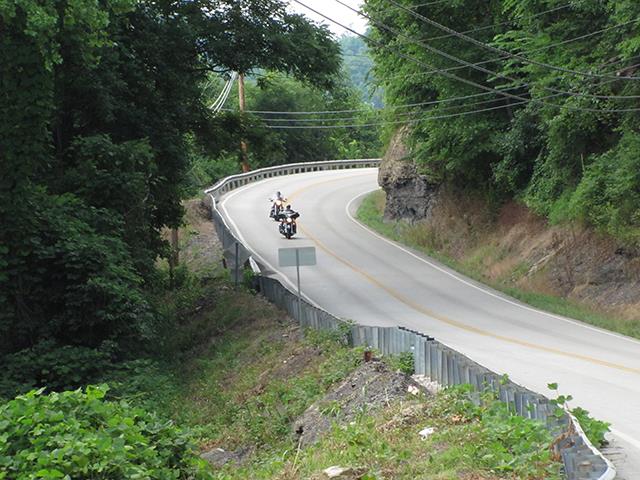 Kentucky Route 11 is a north-south scenic road in eastern Kentucky that passes through the Daniel Boone National Forest. While it runs almost the entire distance between the northern and southern state lines, it’s the middle section that is most interesting to motorcycle riders.

The ride can be divided into four sections and we’ll start our ride report at the southern end, as this is easy to locate on a map. Starting from Interstate 75 at exit number 29, take U.S. Route 25E, also known as the Cumberland Gap Parkway, which heads east towards Tennessee. Traveling just over 16 miles from the Interstate you will see a sign for Route 11 North, which heads toward Manchester.

This first section of Kentucky Route 11 passes through beautiful farm country. Lush fields of corn and pastureland are surrounded by small wooded hills. Along this section, the road crosses over railroad tracks numerous times. In some places the road crosses the tracks at a diagonal, which can create a wheel trap hazard, so slow down and use caution. The road enters the lower section of the Daniel Boone National Forest near Woollum. Manchester is the largest community you will pass through and you will find fuel and food along with traffic.

North of Manchester, Kentucky Route 11 runs concurrently with U.S. Route 421 North for a short distance until it separates with a right-hand turn. The road takes on a delightfully twisty nature as it wanders over rollercoaster hills. In this section, the South Fork of the Kentucky River can be seen paralleling the eastern side of the road in several places. Some of the bridges in this section, while not marked as narrow, can feel tight if there’s opposing traffic. This is not a frequent issue, however, since traffic is light from Manchester northward. The final stretch from Booneville to Beattyville where you temporarily leave the Daniel Boone National Forest has some rough pavement.

Along much of this section you run along the sundrenched road under an expansive sky surrounded by forest with sparse traffic. Arrow straight sections connect sweeping curves until you reach the Red River Gorge Geological Area and the Natural Bridge State Resort Park. There, the road turns twisty again. Watch for traffic through this popular resort area.

At Slade, Route 11 turns left and runs concurrent with Kentucky Route 15. It hugs the edge of the Daniel Boone National Forest along the Red River Valley and the scenery again turns to farmlands surrounded by small wooded hills. Along this you will find an old-time roadside attraction of a bygone era, a working drive-in movie theater with shows during the weekends.

From Stanton you can connect with the Bert T. Combs Mountain Parkway west to Interstate 64 west to rejoin Interstate 75.


Till next time, ride safe!