Construction of the parkway started on September 11, 1935 and by 1966 all but 7.7 miles were finished.  The final piece that remained to be built was across Grandfather Mountain in North Carolina. Hugh Morton, who owned Grandfather Mountain, wanted to protect the fragile ecology of his mountain.  Morton and the government struggled for years to negotiate a solution to complete this epic parkway and preserve the pristine terrain of the mountain.


Linn Cove Viaduct – the engineering marvel that completed the parkway 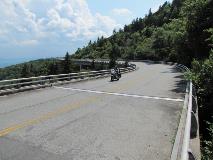 The challenge was to construct a 1,243-foot road at an elevation of 4,100 feet across rugged terrain without carving up the mountain. Figg and Muller Engineers created the design and construction technique. Work began in 1979 and was completed in 1983. The Linn Cove Viaduct was built top down using a technique called “match casting” where each section was cast against the preceding section. Beginning at the southern end, each of the 153 sections was assembled using epoxy and steel cables. The viaduct was built using itself as the only access road for construction with each 50-ton segment lowered into place by a crane sitting on the viaduct. Seven piers were constructed to support the viaduct with the only ground level disturbance being drilling anchors for the piers and removing trees directly under the viaduct.

The last remaining approach bridges and scenic pullouts were finished in time for a ribbon cutting ceremony on September 11, 1987, completing the 52-year construction of the Blue Ridge Parkway. The Linn Cove Viaduct located at mile marker 304 is a marvel to both view and ride as it gracefully curves around the mountain. Near the southern end is a visitor center with access to a trail under the viaduct.  The center offers educational opportunities, souvenirs and rest facilities. Stopping on the viaduct is not permitted. North of the viaduct there is a scenic pullout from which you can walk to get a close-up view from road level. The completion of the “missing link” on the Blue Ridge Parkway fulfilled a more than half century dream and preserved one of the world’s oldest mountains.

It is waiting for you to ride it!