The 7 best roads that cross the Rocky Mountains

The Rocky Mountains stand tall and beautiful and are the home to some epic motorcycle roads. They’re also a symbol of the beauty of America. The "purple mountain majesties" line from “America the Beautiful” is a perfect description of the Rocky Mountains and the motorcycle rides they’re home to.

Ride up and away into the clouds on the Mount Evans Scenic Byway, which climbs 7,000 feet on its 28-mile course to a height of 14,130 feet. The byway was designed by Frederick Law Olmsted Jr., son of the famed landscape architect. Following in his father’s footsteps, he designed a road that provides incredible scenic vistas of the landscape that is the Rocky Mountains.

Carved into the mountainside of the Uncompahgre Gorge, the Million Dollar Highway crosses the 11,018-foot Red Mountain Pass. The road dates back to the silver and gold mining boom of the late 1800s. One legend about how the highway got its name describes how there’s a million dollars’ worth of gold ore in the fill dirt used to build the roadbed. One thing that’s certain, riding this road is a million-dollar experience.

Pikes Peak is home to the Pikes Peak International Hill Climb, which has been run since 1916. The “road to the clouds,” as it’s sometimes called, features more than 156 turns in fewer than 20 miles. The highway was fully paved in 2011, and climbs at an average grade of 7.2 percent to the 14,115-foot summit. Pikes Peak is the highest mountain in the front range of the southern Rocky Mountains, making the view from the top worth the ride.

Composed of a series of roads designed to access the Denver Mountain Parks System, the Lariat Loop Scenic and Historic Byway was constructed between 1912–1914 and has been modernized over the years. The Loop covers about 40 miles and connects the historic towns of Golden, Evergreen, and Morrison. Whether you just ride the loop as a short scenic drive or make a weekend adventure exploring the towns and mountain parks, you’ll have a great Rocky Mountain adventure.

This National Scenic Byway truly earns it name Top of the Rockies, since the whole route is above 9,000 feet and gives you a look at mountain peaks over 14,000 feet high. Along the way, you can ride across Independence Pass, the highest paved crossing of the Continental Divide at 12,095 feet. Or, stop for lunch at Leadville, whose claim to fame is being the highest-elevated incorporated city in the United States. Between the road, views, history, and access to resort communities, this ride should be on your Rocky Mountain must-do list.

The Peak to Peak Highway is composed of three Colorado highways that cover 55 miles of Rocky Mountain motorcycle riding. It’s Colorado’s first and oldest scenic byway, having been designed and designated in 1918. The route reaches its highest elevation at 9,300 feet and offers great views and lots of history. The route also connects three Rocky Mountain towns—Black Hawk, Nederland, and Estes Park—along with plenty of outdoor adventure opportunities.

The only thing that can top riding in the Rocky Mountains is motorcycling along a river in those mountains. Now, combine mountain river motorcycle riding with the history of early American exploration, and you have the Northwest Passage Scenic Byway. The route follows the course of the Clearwater River, which Lewis and Clark explored on their way to the Pacific Ocean in the early 1800s.

Looking for more motorcycling adventures? Be sure to check out more of our “Best of” rides throughout the nation.

Often, the best roads trace the path of a canyon or the crest of a mountain ridge.
That also means the possibility of hazards. We have some tips on how to avoid them. 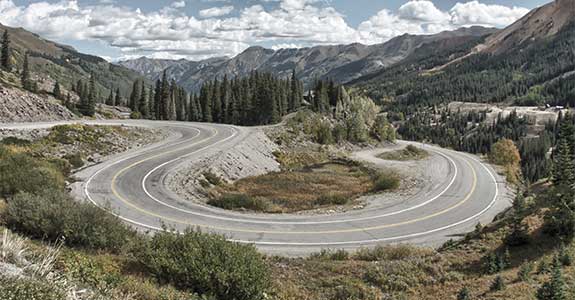