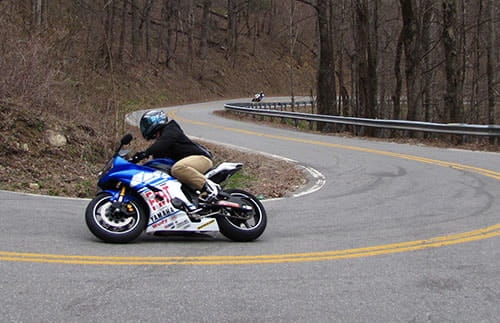 North Carolina Highway 80 (NC80) is one of a growing number of excellent motorcycle roads that have gained a moniker and national awareness in the motorcycle community. Known as the “Devil’s Whip,” it has long been a favorite of local riders. If you are making a journey along the Blue Ridge Parkway (BRP), it makes a great side trip. NC80 crosses under the BRP near mile marker 344, which is between Crabtree Falls and Mount Mitchell State Park. The road is less than 40 miles from end to end and has three distinct sections. Where it intersects the BRP marks the dividing point between the middle and southern section. Here it also crosses the Eastern Continental Divide at an elevation of 3,350 feet.

Starting from the BRP heading south towards Marion, this is the most dramatic section as the road plummets down from the BRP in a thrilling group of switchbacks. After a brief straightaway, it transitions into a wonderful series of curves as you descend the mountain. The next straightaway leads to another switchback, then the road unwinds some. From there it’s a gentler mix of curve types. Don’t let the road fool you. It still has some challenging turns ahead. Next you will come along Lake Tahoma, which is beautiful. Depending on the season and weather, it can be foggy with a wet road surface. The road ends in a long straight section leading to the junction of NC70 for a distance of more than 12 miles. If you have been riding the BRP for a while, NC70 is a good place to find a gas station.

Heading north from the BRP towards Micaville, this section makes a gentler descent from the mountaintop. While less dramatic than the southern section, it’s still a challenging ride. According to the Devil’s Whip website, there’s one curve posted at 15 mph north of the Mount Mitchell Golf Course where at least one fatality occurs each year. Along this 14-mile section, the posted speed limit ranges up to 55 mph and frequently changes to lower limits. It’s well worth slowing down here, as this is a busy recreation area. You’ll ride along the South Toe River and some places are popular river access points where people park alongside the road.

Going north at Micaville, turn right and the road will join NC19E for a few miles. NC19E is undergoing a major multiyear construction project, so expect traffic delays. Gas is available on NC19E. NC80 turns left off of NC19E for its final 10.5-mile section ending at NC226A, which is another awesome riding road. This section contains almost every curve type, including some surprising decreasing radius curves. It’s a great cross section of rural mountain life with everything from working farms to decaying rustic barns, tons of great scenery, and several quaint churches.