7 of the best motorcycle rides in the Southwest 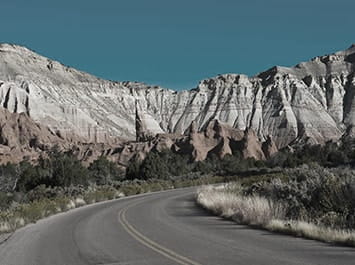 Some of the world’s most epic motorcycle roads are in the American Southwest. Add to it an almost endless motorcycling season, and you could call it motorcycling paradise. Words like majestic, vast, breathtaking, and humbling are all good ways to describe the areas these roads traverse. They take you along the Pacific Ocean, let you look up at tall trees over 1,000 years old, ride across desert landscapes, travel a lonely road, or just romp through the hills. These 7 amazing motorcycle rides are sure to give you memories of a lifetime.

Whether you call it the Pacific Coast Highway, California State Route 1, or PCH, just mention the name and motorcycle riders conjure up dramatic images of riding adventure. Imagine a road wrapped along the edge of the Pacific Ocean, rising from beachside to along towering cliffs. This road’s a movie star made of asphalt, serving as a backdrop for countless movies, TV shows, commercials, and magazine ads. We’ve all seen it, now it’s time to ride it.

Ride this beautiful road that wanders among the world’s oldest living things. Known as the Avenue of the Giants, it’s technically a bypass of U.S. Route 101. Take a journey along the 31-mile length and stop to look up at the giant redwoods. These trees are thousands of years old and so tall you can hardly see the tops. A motorcycle ride on the Avenue of the Giants will surely leave you humbled and in awe.

It’s been said everything is bigger in Texas. Even though the Texas Hill Country is just a small part of the state, it’s still a large region to explore on a motorcycle. The areas around Bandera, Kerrville, and Fredericksburg, Texas, abound with great motorcycle riding roads and southern hospitality. Featuring some of the most rugged terrain in Texas with elevations from 1,000 up to 2,500 feet, there are plenty of exciting roads draped across the hills.

The Loneliest Road in America—Nevada

Thanks to a 1986 Time Magazine story, U.S. Route 50 (US50) in Nevada earned the moniker, “The Loneliest Road in America.” Following the course of the Lincoln Highway, one of America’s first transcontinental highways, the interstate highway system has long bypassed it via I-80. But the old road is still there waiting for you to ride it. Don’t leave it lonesome for long. Plan a trip to explore this historic highway.

The 1969 movie Easy Rider is a cultural landmark to many motorcycle riders. Some of the scenes from that movie were filmed in Monument Valley, along with many Hollywood westerns. The image of the buttes rising from the wide, flat valley is in many ways the image of the Wild West. U.S. Route 163 from Bluff, Utah, toward Kayenta, Arizona, covers 64 miles of epic southwestern American landscape. Go west, motorcycle riders of all ages, and explore this unique place and the road that runs through it.

Designated as a National Scenic Byway on June 15, 2000, New Mexico State Road 14 (SR14) is the old road between Santa Fe and Albuquerque. The mining boom of the 1800s created many of the boomtowns that became ghost towns along SR14. These days many of those ghost towns are alive again with artists and craftspeople, yet many well-preserved ghost town buildings still stand. Find something old and something new—and maybe something blue-green—while you ride your motorcycle along the Turquoise Trail.

Utah State Route 12 (SR12) traverses 124 miles from just south of Panguitch eastward toward Torrey. SR12 received the All-American Road designation on June 13, 2002. The road offers an opportunity to learn about the geology of this region and the people who’ve called it home through the ages. Along your ride, you can visit Bryce Canyon National Park, Kodachrome Basin State Park, and the Anasazi State Park Museum. Turn your motorcycle into a time machine and explore SR12.

Not traveling through the Southwest? No worries, there are also scenic rides to be found in the Midwest. Check out our list of the seven best.

Think you know Route 66? We’ve found some things you may not realize about “The Mother Road.”