Motorcycle lane splitting and lane filtering slowly being accepted in the U.S.

There’s good news for motorcycle riders in an environment increasingly full of distracted drivers. The motorcycle practices of lane splitting and lane filtering are gaining traction across the U.S.

For the uninitiated, lane splitting is a traffic practice where motorcycles pass between cars and trucks moving in the same direction to get through areas with dense or heavy traffic. In lane splitting, riders are allowed to pass through moving traffic on the white dividing lines at higher speeds.

Lane splitting helps reduce congestion in urban areas suffering from high traffic density and long commute times. This is a common practice in many urbanized European and Asian countries, especially where motorcycles make up a larger portion of the traffic mix.

Lane splitting and lane filtering are sometimes used interchangeably, but they aren’t the same, especially when it comes to legislation.

This is usually conducted at stoplights. This allows the rider to move to the front of the line for safer and easier takeoffs from an intersection.

In the U.S., lane splitting and lane filtering aren’t permitted—with the current exception of California and Utah. Four other states—Connecticut, Massachusetts, Oregon, and Texas—have bills currently in the legislative process.

Lane splitting in California has a long history of toleration. While there’s no legal or legislative ruling on this practice, it’s been accepted that lane splitting is beneficial to traffic flow.

Lane splitting has been unofficially condoned by the California Highway Patrol (CHP) for decades. In 2013, CHP issued guidelines for the proper use of this technique, which didn’t have legal backing and were ultimately removed from public circulation.

Recently, Utah passed a law (H.B. 149) that legalizes lane filtering. Under the law, motorcycles traveling no faster than 15 mph can filter between stopped vehicles moving in the same direction. Further, the law, which went into effect on May 14, states this is only permitted on roads with a speed limit of 45 mph or less.

As written, the law has a sunset clause that states that unless further action is taken by the legislature to extend the practice, it will end on July 1, 2022. Both advocates and opponents of lane splitting and lane filtering will continue to watch the Utah experiment.

The idea of allowing lane splitting and filtering is to reduce the risk of a motorcycle rider being hit from behind in heavy stop-and-go traffic. With cell phone use and other driver distractions on the rise, this is becoming more of a hazard.

Legal lane splitting/filtering affords motorcyclists an escape route in those situations. However, widespread use of lane splitting and filtering isn’t in place and will require significant law enforcement involvement and public education to make it a safe and recognized practice.

The non-motorcycle riding public will also need to be educated on this subject and accept that they, too, benefit from reduced congestion.

And just because legal lane splitting and filtering is an option in two states, motorcyclists in those states aren’t required to perform such maneuvers.

Lane splitting or filtering shouldn’t be confused with reckless riding. Weaving in and out of traffic at high speeds isn’t allowed in any fashion anywhere, and should never be a part of your riding routine.

For riders like us, this will be an interesting development to watch. Keep in mind state laws and guidelines when taking your road trips. Don’t assume. Find out the answer first and then ride accordingly.

Here are some other critical motorcycle riding skills you need to practice.

With road trip season underway, you might be looking for events and ride suggestions. Check out our Events section.

When you need to fuel up, be educated about what’s on tap. The rise in availability of E15 gas is causing concern among riders. 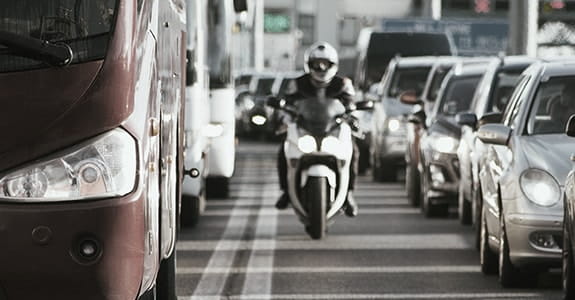